Melbourne is a dynamic and cosmopolitan city.the coastal of the south eastern Australia state of Victoria.at the city's centre is the modern federation square development with plazas bars and restaurant by the Yarra river .Yarra river is a perennial river in east central Victoria.the lower stretches of the river are where the city of Melbourne was established in 1835 and today greater Melbourne dominates and influences the landscape.
can't over go to visit Flin 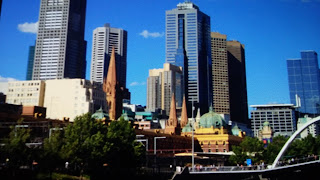 ders street railway station is a railway station on the corner of Flanders and Swanson streets in Melbourne.the main station building completed in 1909 is a cultural icon of Melbourne with its prominent dome arched entrance tower and clocks.
you would to stop in the federation square at (Swanson st&Flanders st) it's a venue for arts culture and public events on the edge of the CBD of Melbourne it is 3.2 ha at the intersection of Flanders street and Swanson at.still a head welcome back my site next time to explore Melbourne city.//