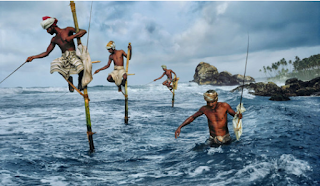 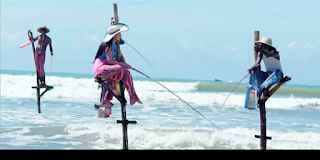 http://bookingdeal.atourguidelines.com
https://bit.ly/2YBBh7l
Stilt fishing  is one of the most interesting traditional fishing methods of Sri lanka. Records indicate that it came into being just after World War II. This mode of fishing was more widely used all along the coast until the tsunami in 2004 which caused such activities to cease temporarily until recent years. The beautiful sight of fishermen perched branched poles as they fish skillfully during dawn, noon and dusk; can now be commonly along the southern coast in towns such as koggala , Kaththaluwa and ahangama. Occasional stilt fishermen can also be seen amongst the waters of Madu River, etc.
Though stilt fishermen make the activity seem easy and comfortable; stilt fishing requires much skill and balance. A vertical pole with an attached crossbar is embedded into the sea floor among the shallows, or on a riverbed. The crossbar allows the fishermen to be seated a couple of meters above the water causing minimal shadows on the water and hence little to no disturbance amongst the sea life. The stilt fishermen then use a rod from this precarious position to bring in a good catch of spotted herrings and small mackerels from the comparative shallows of the sea or from the river. They collect the catch in a bag tied to the pole or to their waist.
Those who wish to learn more about stilt fishing should book a tour to mirissa  beach, hikkaduwa Beach orunawatuna  Beach. Some of the fishermen are quite happy to show how they fish, and speak about their lives. There are also opportunities to try the activity if interested; not to mention the breathtaking photographic views provided by the fishermen silhouetted against the horizon at dawn and dusk.
on July 08, 2019