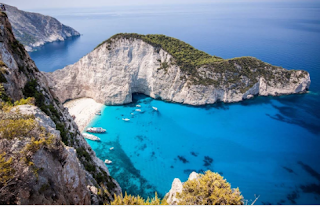 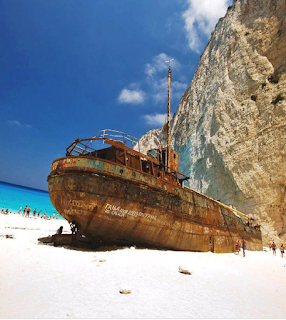 http://bookingdeal.atourguidelines.com
https://bit.ly/2NhRH2S
The island of Zakynthos is a jagged little piece of land off the southwest coast of GREEK that features a number of rocky coves cut off from the mainland. In one of these secluded bits of paradise is Navagio Beach, a sandy little strip that would be remarkable for its beauty, but is made more so by the crumbling remains of a smuggler’s shipwreck
.Also known as SHIPWRECK BEACH and SMUGGLER'S COVE the beach became a mini ship graveyard in 1983 when the shipping vessel known as the  PANAGIOTIS crashed on the scenic shore. According to reports, the ship was smuggling cigarettes, booze, and maybe even humans when the authorities caught onto the trail and chased it through bad weather, right into the cove, where it ran aground. Ever since the crash, the hulk has sat on the shore slowly falling apart.

The crash site soon became a popular destination for vacationers looking not only for an untouched beach but called by the siren song of the decaying ship. As the bulkhead of the ship rust away the hull seems to be sinking into the sands, but most of the vessel still sits on the beach. Today, the beach is still a popular site for people looking to get off the beaten path, although the path is often beaten by hundreds of others at peak times.
The beach was prominently featured in the DESCRNDSNTS of the Sun Korean drama, which led to a surge of interest among Korean and Chinese tourists.
The ship is only accessible from sea, and most tour operators on the island run day trips. Some tours run only in high season from April to October. The best time to visit the beach is early morning before the hordes of tourists spoil the landscape.
on September 13, 2019