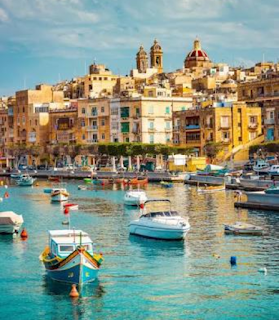 http://bookingdeal.atourguidelines.com
Malta is an archipelago in the central Mediterranean between Sicily and the North African coast. It's a nation known for historic sites related to a succession of rulers including the Romans, Moors, Knights of Saint John, French and British. It has numerous fortresses, megalithic temples and the Ħal Saflieni Hypogeum, a subterranean complex of halls and burial chambers dating to circa 4000 B.CFounded in 1566, Valletta is Malta’s capital cityand is one of Europe’s smallest (and southern-most) capital cities, with many buildings having a strong Baroque character.Built on a peninsula between two natural harbours (Grand Harbour and Marsamxett Harbour), the city sits perched on higher ground. Its streets were aligned in a grid-like layout, being wide and straight, which is said to have been chosen to allow the sea breeze to provide respite from Malta’s hot summer weather.

Valletta is Malta’s administrative and commercial hub, with several government departments occupying some of its historical buildings and several financial and logistics companies having their offices here.
Despite its small size, Valletta is packed with sites of historical significance, with buildings dating back to the 16th century. So much so that it’s been an officially listed UNESCO World Heritage site since 1980.
That’s right, the city of Valletta as a whole is recognised by UNESCO for its historical and cultural value. That doesn’t mean the place is swarming with tourists however, although tour groups aren’t an uncommon sight, particularly during the summer months.
Intrigued? In this article, I cover the basics of what you need to know about Valletta, what makes it so special and what’s worth seeing and experiencing when you decide to pay Malta’s capital a visit.
.
on March 01, 2020