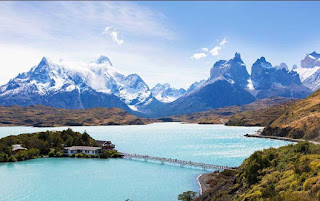 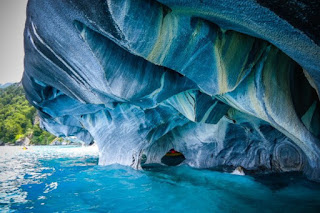 Chile is a long, narrow country stretching along South America's western edge, with more than 6,000km of Pacific Ocean coastline. Santiago, its capital, sits in a valley surrounded by the Andes and Chilean Coast Range mountains. The city's palm-lined Plaza de Armas contains the neoclassical cathedral and the National History Museum. The massive Parque Metropolitano offers swimming pools, a botanical garden and zoo.

Nestled deep in the Patagonian Andes, you can find the Cuevas de Mármol (Marble Caves) on a peninsula of solid marble.  You can find these fascinating formations on the outskirts of Lake General Carrera along the Chile/Argentina border.  The caves are accessible by boat.  More than 6,000 years ago,  the waves washed up against the calcium carbonate formations creating the caves. While the caves appear to be covered in smooth, swirling shadows of blue, it’s actually a reflection of the lake’s indigo waters. The intensity and hue of the colour changes regularly, depending on water levels and time of year.

Formation of the Caves

The water levels have had a major impact on the formation of the caves.  With the high water levels, some 6,000 years ago, the marble dissolved faster at the water surface. Small amounts of seeping water came through the cracks in the marble enlarging the fractures.  The cracks then became big enough to  allow the waves in and wash away the dissolved material. The water also smoothed and shaped the marble. Over the years, the process created the cave and the incredible formations inside it.

The process of water erosion caused by the waves continuously splashing against the walls of the marble; proved to be a fairly fast geological process.

The water within the General Carrera Lake comes from melting glaciers in the Patagonian Andes. The melted ice leaves minute particles in the water.  These particles refract the blue part of sunlight which creates the distinct blue colour of the lake.

Located near the Chile-Argentinean border, along the azure waters of Lake General Carrera; the caves feature three main caverns: the Chapel (La Capilla), the Cathedral (El Catedral), and the Cave (La Cueva). You can explore the caves with a small boat or kayak.  It is possible to do this trip pretty much all year round, unless the lake’s waters are really rough.

The Marble Cathedral (Catedral de Mármol) located Northeast of Chile at the peninsula is the largest of the three. Closer to the northern coast, the Marble Chapel (Capilla de Mármol) got its name because of the church-like pillars formed in the monoliths.  If the water levels are low enough,  you can actually take a walk under the island, through a series of tunnels.