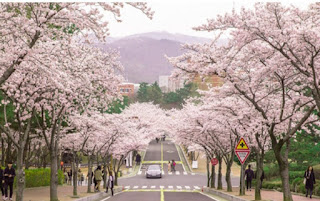 On the go peach blossom country

The Korean peninsula is a tantalizingly unexplored slice of East Asia – a pine-clad land of mountains, misty archipelagos and rice paddies of emerald green, studded with urban pockets of incomparable joie de vivre. While its troubled history has made Korea’s very existence nothing short of miraculous, amazingly its traditions and customs have largely survived intact – and for visitors, this highly distinctive culture is an absolute joy to dive into.Continue reading to find out more separate ways in 1953 after the catastrophic Korean War – essentially a civil war, but one largely brought about by external forces, which left millions dead and flattened almost the whole peninsula – the two Koreas are now separated by the spiky twin frontiers of the Demilitarized Zone. North Korea has armed itself to the teeth since 1953, stagnated in its pursuit of a local brand of Communism and become one of the least accessible countries in the world. Unbelievably, many foreigners seem to expect something similar of South Korea, which shows just how well kept a secret this fascinating place really is: beyond the glittering city of Seoul, gimchi, dog meat and taekwondo, little is known about the country in the outside world (and in actual fact, one of those four has largely gone the way of the dodo anyway).

After the war, the South gradually embraced democracy and has since gone on to become a powerful and dynamic economy. Its cities, bursting with places to visit, are a pulsating feast of eye-searing neon, feverish activity and round-the-clock business. Here you can shop till you drop at markets that never close, feast on eye-wateringly spicy food, get giddy on a bottle or two of soju, then sweat out the day’s exertions at a night-time sauna. However, set foot outside the urban centres and your mere presence will cause quite a stir – in the remote rural areas life continues much as it did before the “Economic Miracle” of the 1970s, and pockets of islands exist where no foreigner has ever set foot.

And for all its newfound prosperity, the South remains a land steeped in tradition. Before being abruptly choked off by the Japanese occupation in 1910, an unbroken line of more than one hundred kings existed for almost two thousand years – their grassy burial mounds have yielded thousands of golden relics – and even the capital, Seoul, has a number of palaces dating back to the fourteenth century. The wooden hanok housing of decades gone by may have largely given way to rows of apartment blocks, but these traditional dwellings can still be found in places, and you’ll never be more than a walk away from an immaculately painted Buddhist temple. Meanwhile, Confucian-style formal ceremonies continue to play an important part in local life, and some mountains still even host shamanistic rituals.

As for the Korean people themselves, they are a real delight: fiercely proud, and with a character almost as spicy as their food, they’re markedly eager to please foreigners who come to live or holiday in their country. Within hours of arriving, you may well find yourself with new friends in tow, racing up a mountainside, lunching over a delicious barbequed galbi, throwing back makkeolli until dawn, or singing the night away at a noraebang. Few travellers leave without tales of the kindness of Korean strangers, and all of them wonder why the country isn’t a more popular stop on the international travel circuit.

Where to go in South Korea

Korea is still something of an unknown territory, and more than half of all its visitors get no further than Seoul. One of the largest and most technically advanced cities in the world, the capital regularly confounds expectations by proving itself steeped in history. Here, fourteenth-century palaces, imperial gardens, teeming markets and secluded tearooms continue to exude charm among a maze of skyscrapers and shopping malls. From Seoul, anywhere in the country is reachable within a day, but the best day-trip by far is to the DMZ, the strip of land that separates the two Koreas from coast to coast.