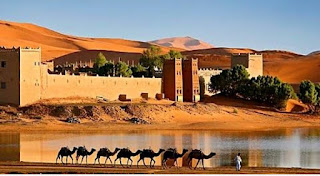 Morocco, a North African country bordering the Atlantic Ocean and Mediterranean Sea, is distinguished by its Berber, Arabian and European cultural influences. Marrakesh’s medina, a mazelike medieval quarter, offers entertainment in its Djemaa el-Fna square and souks (marketplaces) selling ceramics, jewelry and metal lanterns. The capital Rabat’s Kasbah of the Udayas is a 12th-century royal fort overlooking the water

Morocco does, however, have two regions that conform to the mental image most Europeans have of the Sahara Desert: Erg Chebbi and Erg Chigaga. The Arabic word Erg means “dune field” and describes vast, flat areas of the desert containing sand dunes created by the wind, with little or no vegetation.

The Sahara Desert covers a large part of the African continent – more than 3.5 million square miles, in fact. But only a small part of it is in Morocco. The Moroccan Sahara is located in the south and east of the country, mostly along the border with Algeria.

Snow in Morocco is not unusual. Two ski resorts in the Atlas Mountains—one near Marrakech and the other near Ifrane—experience fairly regular snowfall each January and February. ... Algiers received the “heaviest snowfall in living memory.